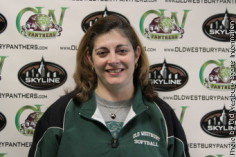 Coach Fazio is the director of recruitng for the Long Island Hurricanes.  She has been with the organization since 2006.  Her primary function will be to work with our girls on educating them on the recruiting process.  She will also train all of our teams on all age levels to teach fundamentals, advanced game strategies and aid our players and coaches to prepare their teams for the expectations and training that a collegiate level program expects.  She will also be on hand to work with coaches on game management, player placement and recruiting.

Fazio’s coaching career started in 1991 at Southwoods Middle School in Syosset where she coached both the softball and volleyball teams.  Over the next 25 years she moved on to coach softball at all ages from Little League, Williamsport, high school and the collegiate levels.

Coach Fazio is a native Long Islander from Wantagh.  She played volleyball, basketball and softball as a Warrior.  Her senior year, she was voted MVP of the volleyball team and received All-County honors.  In addition, she received All-League honors in softball as well as being named Senior Athlete of the Year.  Her softball team was second in the state her senior year, tallying a record of 28-1.  Softball continued through college at Hofstra University where she was a four-year starter and three-year captain.

Your form message has been successfully sent.

You have entered the following data: