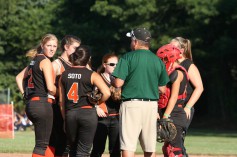 Marc, a native of Babylon, New York started his athletic career playing three sports at Babylon High School, from there he moved on to play baseball at the collegiate level in Gannon College in Erie, Pennsylvania.

In 1979, Marc coached baseball at Holy Family High School in Huntington, New York, he then moved on to coach softball at Hofstra University for 3 seasons, from 1986-1988, where he improved from season 1 with a record of 7-14 to season three with a record of 24-11. At Hofstra University he produced two Academic All Americans in three years. He was a Head Coach for the Empire State Games in 1987 and 1988. Coach Fazio was  the Assistant Coach of the SUNY Old Westbury softball teamfrom 2006 -2016 and is currently the head varsity softball coach at West Babylon High school.  He is also a physical education teacher at St. John the Baptist High School.

Marc became the president of the Long Island Hurricanes in 2009 and has brought his core coaching methods and his vast experience on the field to work for Hurricanes players. Marc instills the necessary values that today’s demanding collegiate sports programs require to aid our 18U elite players in reaching their goals.

The culmination of his efforts within the organization he leads has resulted in the Hurricanes 18U Gold Team. This team represents the best our organization has to offer and will practice and compete at the highest level available to provide maximum exposure for our Hurricane athletes.

Your form message has been successfully sent.

You have entered the following data: